Our Showroom and Office is open Monday to Friday 7:00am till 4:30pm – Closed Public  Holidays and Long Weekends.

A summary of decorative styles and characteristic descriptions since European settlement in Australia.

Australian architecture was strongly influenced by British designs as a result of European Settlement in 1788.

Colonial and Georgian architecture is seen in early government buildings and the homes of the wealthy.

Victorian architecture allowed greater displays of prosperity through rich and ornate decorative features such as cast iron lace work and slate roofs as a reult of the Australian gold rushes.

The Federation architecture style of the turn of the 20th century, featured European Baroque elements as well as Australiana themes. It was less ornate as Tudor-style woodwork and fretwork replaced wrought iron.

The Modern, contemporary cornice style reflects anything that is currently popular today. It is characterised by plain styles consisting of straight sharp lines and right angles or even no pattern at all. If this is the style you are looking for we have put together a range of

Example of a stepped or shadowline cornice

The Colonial style is simple, symmetric and elegant. Cornices are characterised by soft curves, multiple fine lines and wave patterns. In many ways this is a very elegant and timeless style that will never date.

The 1930s Art Deco Style has an understated elegance with the use of geometric motifs . Diamonds, Triangles, Bold Squares, Layered Shapes and Vertical Lines all help create this ultra retro style.

Victorian home architecture incorporates various styles ranging from classic facades and Georgian styles to extremely ornate and decorative embellishments. “More of everything” was a trademark of the era. We have sub-divided our Victorian range as follows:

The Paddington style consists of multiple lines and deep coves typically found in terrace homes of the era.

Chain and drape designs consisting of medalions, bows, urns with leafy chain details joining the pattern together, were inspired by the European classical style.

A Range of diverse shapes that create overlapping patterns, are the rare but unique style of the Neo Gothic era. 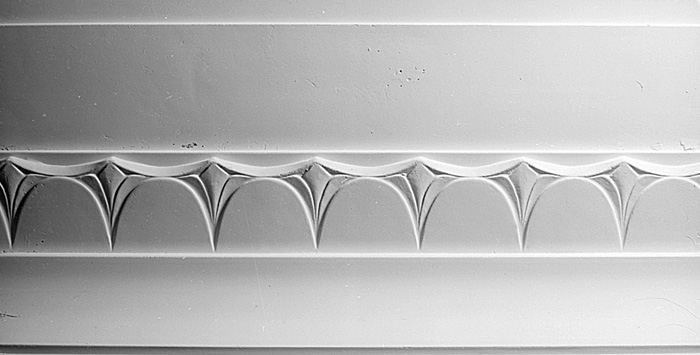 Back to main Cornice Page